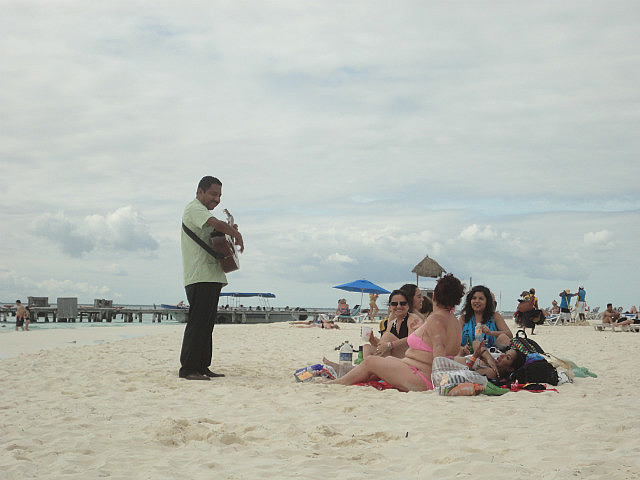 The ADO bus terminal is in downtown Cancun. If you’ve come here for Spring Break you’re in the wrong place. The Zona Hoteliera is some 6 kilometers or so away, set along a stretch we’d heard could be a kitschy Mexican Vegas full of All-Inclusives and seedy bars. We simply got our packs and strolled along Avenida Tulum past a few McDonalds and the like to our horrible little hotel. It’s best feature was a pool that you wouldn’t want to swim in. Our room was typical of a motor inn I suppose, but of the type where the ‘main clientele are serial killers’ type. I won’t spend a lot of time on it, because we didn’t spend much time in it.. but there was a lot of moldy concrete, rusty pipes and human hair.

We eagerly left the next morning, taking a short taxi ride to Punta … where we caught the next half hourly ferry across the water to Isla Mujeres. So far in the Caribbean you can immediately get a sense of the islands frequented by daily hoards of cruise ship visitors and Isla Mujeres has that vibe but it’s got something else as well. It’s a lazy kind of meander around type place with a touristy beach-front and pedestrianised street full of souvenir shops and restaurants. Most people hang around this area in between stints at the wonderful beach; but we discovered a nice hint of local scenery just a few minutes walk out of town; behind the naval base. Locals hang out on their concreted front porches in typical white painted concrete houses, perhaps with an ornate spattering of artistically painted tiles. Kids play hide and seek in the street.. I even ratted out this little girl hiding behind a bin.. Boys win! Yes! A jolly owner of a Cuban restaurant in his delightful Panama hat and cigar motions to us. We’ll be there soon enough, so he can wait.

Closer to town there’s a bunch of various vendors calling you ‘amigo’ and a bunch of restaurant touts proclaiming the ‘best lobster’ but they’re cast away with a simple ‘No gracias’ or even a smile and shake of the head. But I do really like the souvenirs here. There’s that whole celebration of the dead imagery with Tim Burton style skeletons dressed in old fashioned clothing. There’s portraits of Frieda, and typical old style tattoo artwork like hearts and flames, halos and thorns.

The beach really is lovely. Typical beautiful white sand and turquoise water and a bunch of strolling vendors of course as well. Some selling popcorn, other selling a serenade or massage in purpose built marquees.

Isla Mujeres is sacred to Mayan women and is so named after the fertility pilgrimage all local Mayan women made to the island. In pirate days it was believed that this is where pirates ‘stashed’ their women whilst they plundered the rest of the area. Irrespective of any of those legends, it’s found it’s place today as a refuge for those consumed by the beast that is Cancun.

We spent our time dodging tourists driving around in golf carts and between the beach and handful of amazing restaurants did sweet F’A.

I did take in a dive to an old World War 2 vessel now known as C58. It’s broken sunken hull lies on the sea bed in clear waters at about 25 meters. We swam past a school of spotted eagle rays, their rich navy blue hide speckled in leopard like white spots, and trailing a whip like sting. We entered the hull, scubaring along through the bridge and down the narrow hallways, enclosed by the rusted frame to an open area at the back. We could glance down into the hull through the rusted but teaming with coral hatches into dark spaces full of sinister looking lion fish. Inviting but a big no-no for untrained divers.

Our second dive took in the shallow reef between Cancun and Isla Mujeres. It was nice enough, no Roatan, but we did find a nurse shark, a green moray eel looking angry under a rock and massive schools of barracudas and jacks. Rich in wildlife, perhaps something lacking at Roatan.