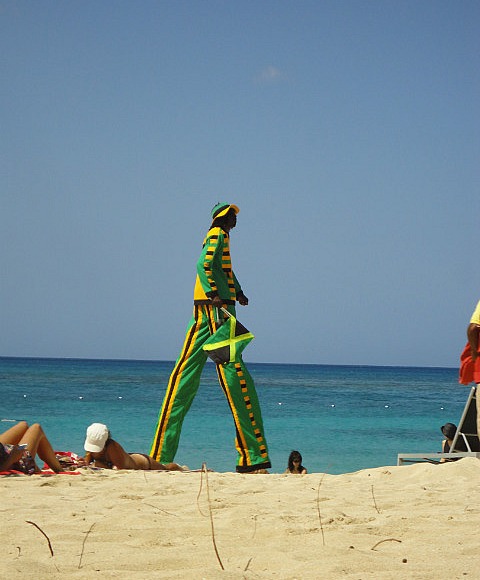 Montego Bay or MoBay as it’s affectionately known, lies on the north-east coast of Jamaica. It’s been a popular resort city for decades, flourishing more recently as a cruise ship destination. Given that fact, or add to it the recent economic turmoils and you’ve got what we found in Montego Bay. A bastion of faded glory. We got on the $25 airport transfer bus, stopping at every all-inclusive mega-plex along the way, from Ocho Rios and Runaway Bay, picking up swarms of vacationers and honeymooners, accommodating their last minute toilet deliberations by waiting patiently in the bus while they contemplated ‘should I or will I be right?’..

Everyone got off at the airport and we bustled onto a nearby mini-van to transfer us to ‘Tobys Resort’. Faded Glory started at Tobys. The grounds were a kind of upper-class caravan park with most paintwork peeling, patchy or gone. There were two pools and whilst they looked clean and we saw workers dumping bags of chlorine in them, you still wondered if a resulting ear infection would be the outcome a quick dip. Staff were pretty ambivalent here as well, a raise of the eyebrows indicating you had their attention. Waiters, rather than ask ‘What may you require for dinner..’ instead flick you a quick glance and a subtle raised eyebrow. Plates are delivered as though they were plates of slop.

The ‘Hip Strip’ as it’s known in Montego is a ‘closed-for-the-summer’ stretch of run-down trinket shops and kitschy restaurants. Being the minority who are actually staying in town, we’re at the clutches of vendors and touts who ordinarily thrive on the activity of the cruise ships. So we cop it all. Even comments like ‘I like white people!’ and ‘****in people’ .. We aborted a walk into the town square because it just got too much. We couldn’t walk 50 meters without an interruption, and most often there’s a whole dance to weave into your circle of trust. Now, I completely understand that this is what people do, this is their job. This is how they feed their families. And I’d do exactly the same thing if I were in their position. But oftentimes there’s a snide remark or abrupt change in attitude when it’s clear there’s no sale..

Resorts and restaurants are charging a little under what you might pay back home, but not much. A typical local worker in the resort takes home about $50US a week. So $10 bucks a day. That’s half a lunch for one of the guests. That 3 beers. I don’t know if I’d be resentful if I was in their position but it would certainly **** me to see these fat cat foreigners flipping bills out of their fat wallets to pay for a ridiculously overpriced beer; and be completely unperturbed by it. What’s more there’s probably significant expectations regarding service from a foreigners perspective. Particularly in the all-inclusives. It didn’t feel overly nice to be lumped into the same crowd, but there simply is no budget travel option available here. There isn’t.

There’s significantly more hype on the days the cruise ships roll into town. And it’s actually more fun. Being a bit straggly looking (speaking for myself Rebecca) we get far less attention when there’s sharper looking targets around. We pop down the ‘hip strip’ to Doctors Cove beach. You pay 6 bucks to walk through the gates and suddenly a variety of assorted comfort items such as chairs, umbrellas, tables, drinks and food become available. We wander up the beach a bit, find a nice tree and drop our sarong down. Yes, one sarong, between the two of us. No wonder they left us alone. A group of Canadian lads, looking newly 21 arrive on the beach and are instantly grabbed by this amazingly tall and thin Jamaican guy smoking a joint. Unashamedly he pulls out some of his best buds and tells the lads to..

‘Squeeze it.. give it a squeeze.. aaaaalllright yeah.. see that.. sticky buds.’

And the lads love it. He leads them over to the ‘dealers corner’ of the beach where they’re fixed up before setting up their chairs down near the water and lighting up. A security guards walks past, and even the police, but it all goes ignored. As our shady tree is in the proximity of ‘dealers corner’ we see it go down all day to all types of people. The guy would be making a killing.

But the beach is absolutely beautiful, all that annoying hassle dissolves as you walk into the crystal blue water. It was the saving grace of this horribly over-done coastal strip.

We unfortunately could do nothing about the cost of eating given the lack of local options, so spent most of our time by the pool, in the resorts ****** gym and on our roadside balcony sipping some local Jamaican rum, overproof at 63% but a bargain at just $3.25. Lucky for us we had the time to waste; had I flown around the world to spend two weeks in Montego Bay, I’d be getting the hell out a lot sooner.