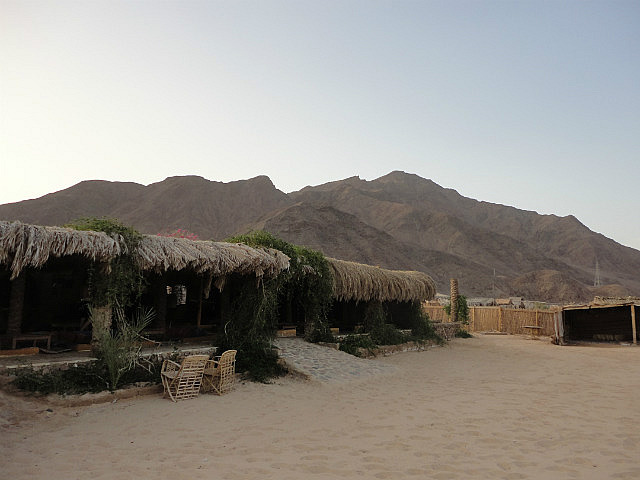 On this stretch of road, our driver doesn’t let the speedometer drop below 110kms an hour. We fly around corners and the dust behind us looks more like the storm at the pyramids on day one. I wonder if we are just trying to make good time or if its because this notorious stretch of road is one place that a tourist bus like ours just shouldn’t stop. We whizz past a few Bedouin camps, little kids on camels and more rose coloured sandstone mountains probably 500 million years old. The scenery in moonscape like. We pass the city of Nuweiba and many half built resorts left abandoned. We find out later that they are a result of past Israeli occupation of Sinai where they developed the infrastructure on Egyption territory but after war and a signed peace treaty, the Egyptians got their land back but had to pay the Israelis for their development…go figure…to which now stands abandoned.

Most of the beach camps comprising of huts right on the Red Sea’s edge are also falling apart and we wonder what ours will look like. But pulling into “Sawa” (meaning “together”) and walking through an open breezy bamboo thatched restaurant filled with floor cushions and tables facing the gorgeous coast…everyone is happy. Our huts are also made out of a thatched bamboo material with rugs on the ground and nothing more than a mattress and mosquito net inside. Each has their own padded hammock out the front and all are simple but clean and comfortable. Things dry here within seconds compared to these types of establishments in other parts of the world and it works. It really is absolutely perfect. We all head to the beach and spend the next day relaxing on the sands, chilling in the restaurant and snorkeling. Its some of the best snorkeling we have ever done. Heading out about 200 meters the reef drops and that beautiful crystal clear water is teaming with every type of fish imaginable and gorgeous coral formations. We find an old metal hook in the water and play tag teams moving it from one place to another for the next person to find. What a life..

Our last night is spent drinking on the beach and eating out on a long candlelit table right under the stars. The setting is incredible with clear skies to which you can make out the city lights of Israel, Jordan and Saudi Arabia across the Red Sea. However, our gaze is momentarily pulled in the northern direction where a still and black night is interrupted by a huge white flash. “What the hell was that?” we exclaim. No one has any idea. Lightening? flares? aliens? rocket fire in a troublesome region? Surely not. After a few speeches thanking Mohammed we retire to bed just after 10pm as the generator turns off and continue to wonder about that flash. (I find out days later that it is indeed rocket fire around Gaza. Israel retaliates and blows up two targets breaking a cease fire since November 2012. Its a reminder of how close we are to the frontline and I wonder how its possible that we all can be having the time of our lives while less then 100kms away, a continuos war brews.)

Tomorrow is another day and one we have been told to be patient. Its time to cross the Red Sea not by Moses parting it for us but by ferry, to Jordan. Its only 30kms by water so it cant be all that bad…or can it?