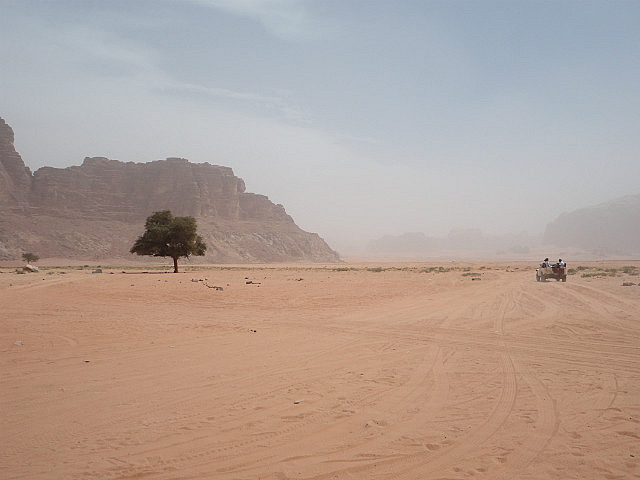 Wadi Rum, sounds like a cheap night out at the grog shop doesn’t it? But it’s not. It’s known to the world as ‘vast, echoing and God-like’ according to T.E Lawrence. It’s a desert landscape. ‘Big deal, deserts are sand, I’ve seen sand’ you say. Well Wadi Rum is very different. Imagine a deep, rich, red soil through which are strewn mountains of up to 1800 meters. Being winter there’s also some shrubbery and grasses around as well. All of this was ahead of us, including a night in the wilderness with some Bedouin people. Faizal rallied the troops; rested and less moody and we set off to the local liquor joint to buy supplies. Technically this was water, but we took the chance to get some local Akra, a kind of aniseed liquor, at 50% it was serious business. Faizal took the opportunity and purchased some 10 bottles of the stuff.

‘For us.. Faizal.. ? we ask..And smiling, like a psychopath, he says ‘No… wedding party!’ Given there’s a military checkpoint ahead he distributes the bottles among the group to diffuse any military suspicion regarding smuggling of goods. How very ‘RT’ (Responsible Travel). Though there’s a bit of dust in the air, when the first sandstone mountains appear, everyone stops talking.

They’re these monolithic, rippled and ridged giants in the landscape, rich and red in colour and looming around each other like they’re part of a football team. We make a quick stop in the town at the feet of the team and pick up some supplies for lunch, hommus, bread, pickles.. that sort of thing. By now we’ve changed vehicles and are ready for the desert landscape in one of three 1980’s era Landcruisers. They’ve endless kilometers and are this solid mass of metal panels, built tough and still going strong. Our Jordanian driver is a sight for sore eyes with his amazing headscarf number and flowing gowns. And he pokes fun at Faizal when we’re all set to go minus Faizal, who is scuffling around outside the car for some reason..‘Bye Faizal..’ he says and steps on the gas..

We set off, plunging off the town road and onto the desert sand. The mountains looming either side of us and in the distance. Their jagged shapes carved by eons of wind, rain and oceans. After 20 minutes or so we stop at The Thamodian Spring. Nestled at the base of some amazing rock formations are both a spring and some ancient Thamodian inscriptions. We’re told they’re something like 4 to 5 thousand years old and say something along the lines of ..‘Hey guys, listen, there’s a really cool watering hole some 5 or so kilometers north from here. Keep left of the Pyramid Mount but not so far as the salt lakes okay? Kay. Good luck!’

The Thamodians were nomadic tribes. Originally from Saudi Arabia they eventually settled in Petra where they began the first constructions of the ancient city. We jump back in the cruiser and drive past a solitary, haunting tree in the landscape. Keeping to tracks in the sand we soon pull up at a Bedouin tent for lunch. We all dig into our supplies and a Bedouin man wanders past with a pot of tea with sage. He also lights up this iconic looking frankincense burner, which wafts rich, flavoured smoke over most of our group, who are busy eating hommus. Behind us looms the Khazzalah Canyon, famous as a bastion for Laurence of Arabia during his campaigns against the Ottomans. A narrow crevice between massive walls of adjoining mountains that at times converge and twist overhead. Scattered along the walls are more Thamodian art work, and also some Arabic inscriptions, one a warning to advancing Turkish forces.

Our next stop is at a massive sand dune. We’re invited to shoe-off and climb the rich red soil to the top. The view of the landscape is wonderful but it’s not long before we can resist running down the steep slopes. Um Frouth Bridge is a naturally formed rock bridge much like the London bridge was back on Victorias Great Ocean Road. People take their turns taking photos up here but to be honest, it looks pretty precarious.

We roll into the Sheiks Bedouin camp. He walks toward us, his aviator shades, fine white silk headscarf and long green leather jacket over flowing gowns. It turns out he shares a kind of affinity with Cam, the dad of the group who’s grandfather fought with Laurence of Arabia and his Arabian allies around 1917. So, it turns out, did the Sheiks grandfather. They share a moment as the rest of us arrange our alcoholic drinks for the evening. We’re assigned a canvas tent, but it’s raised off the ground on a platform and has inside two beds, a small table and even a window. Blankets are all provided. Lovely. Even the bathrooms are clean. Yes, I know, bathrooms..there’s no digging holes here.

We’re told to **** off and go climb the the mountain out the back of the camp. To be honest, I’d be happy to just stay put, the afternoon sun was disappearing and it was getting cold so.. OH ALRIGHT! .. ffs! The climb up is fine, plenty of shard and some loose footing but the view from the top is a good 300 degrees of pre-sunset landscape. Monoliths all over the landscape like the backs of giant desert whales. It’s breath-taking. We all take a silent moment up the top there, contemplate life, Hindu Gods, cats vs dogs, the meaning of pasta.

As the sun approaches the horizon we descend and mosey on over to the sunset perch. A nearby sheer cliff-face from where we can sit and simply watch the sun disappear through the gaps of the mountains. It’s a genuinely calm moment spoiled only by the impromptu impersonation of an angry camel by Faizal. He flattens out his nostrils and squeaks up his voice..‘I’m angry.. rah rah rah’ what a nut job.

The Bedouins cook us up a storm. From out of the ground they pull two platters of chicken and potato; back in the party tent they serve up salads, soups and bread and we all line up to gather portions on our plates. It’s slow cooked, meat-off-the-bone magic. After a little Arak and water, we’re invited outside to the fire where the Bedouin men are standing in a line, shoulder to shoulder, shuffling from one foot to the other, clapping and making this camel grunting noise with a few soprano chirps thrown in here and there. Faizal manages to get Cam up and they both join in the shuffle, moving somewhat rhythmically with the rest of the group. Somewhat.
The rest of the night we drink up a bit and admire the desert sky. Bright and luminescent. Filled with countless shooting stars. The sounds of crackling fire, conversation and laughter. The smell of food and smoke. It’s serene. The night is cold but the blankets heavy and despite a weird static electricity issue with my bed, I sleep perfectly.

We’re up at 6:30am to see the sun rise from the opposite end of the sky. Breakfast is modest and soon we’re packing everything into the vans to make our way back into town where a waiting bus will drive us the several hours to Jordans poster-child.. the ancient city of Petra.