Right wtf cos why? Why would I go to this stupid event? It’s just not really my thing.

But I want to take you on a journey of self discovery where the inner satanic child transforms to an elder-blossom on a lichen laden patch of oak, in a peaceful forest somewhere in Maribyrnong. Come..

I recognise that attitude has changed for the breadth of the extreme metal fan base. The outer-fringes, the colder ends of the spectrum who dwell in the purity of the genre would adhere to their resolute dedication to the art and shun anything of lesser grade. They wouldn’t be seen dead at a festival like Laneway.. and by dead.. I mean maybe in corpse-paint.. that would be acceptable.

The story was, I bought Laneway tix for Rebecca for Christmas, the thinking being that she and a friend could just rip the place up with their fuckin sick dance moves, of which I don’t really understand, but I’m sure could do, because I’m an amazing dancer/choreographer. And so from Christmas up until say like a week prior to the festival I’m of that belief..

‘She’s going with Nat, they’ll smash out a record awesome time, and I’ll so something else with the time.. ‘ .. that is until Rebecca comes upstairs, where I’m blogging about something stupid that no-one reads and will likely become archival wasteland of the inevitable deprecation of whatever we experience currently as the Internet.. and says..

‘So we’ve got Laneway next week… ‘

Urgh I thought.. corpsepaint or not I’d need to make this work.

‘Sometimes, in the interests of companionship and relationships, you just need to get yourself in the space for this sort of stuff’ .. a good friend told me.

I looked at the bill again.. so I know a few acts. I know BADBADNOTGOOD, I know Bonobo, I’d heard of The Internet and I knew Tokimonsta. Could be alright. Those groups were fine. Maybe I’d be alright. And hey, the weathers forecast to be like 28c, and sunny, it’s gonna be beautiful. So I garb out like I always do at these things; in fuckin angry metal shit. I’d just bought a new Nails long sleeve.. so that was going on. Then shorts cos it was hot, #lessmetal I know.. and then a black hat and sunnies with my Vans to tie it up. I looked sick, felt okay about it.

I’m sure you know Nails. But let’s contrast them against what I was expecting to see right here and now.. here’s one of their more recent:

SO that’s the attitude I was taking to Laneway. Fucking shit up everyone! And actually to add to the excitement it seemed Rebecca’s little bro Michael and his darling girlfriend Prudence were going too, so that’d be fun.

At the risk of not covering everything in detail I want to cover off some of the key highlights:

Even from the entry line I’m wanting to tear the face off this kid in front of me.. it’s already crowded and I can see from his ID, that they’d asked us to produce, that he was born in 1997. BORN. In 1997. Shouldn’t he be in Grade 6? I felt every year of my 38 total, particularly when on upon he was asked to show his ID, ticket and have his bag search he over-enthusiastically responded..

‘Oh my GAAAAWWWWWW- (voice squeak) – AAAWDDDDUHHH .. This is so Frustrating!’

And so we’re in.. we roughly walk around and sus out bearings and stuff.. I take a few random pictures.. Rebecca eats a grapefruit or something. 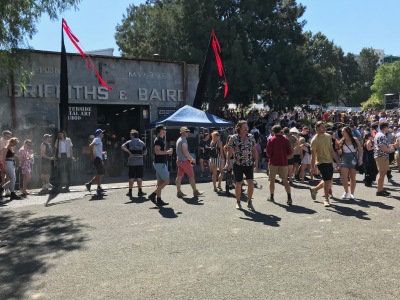 We end up at some stage called .. nah I forget .. and Miss Blanks starts her show.

I’ve never heard of her. Well.. him, it turns out.

Well something! I dunno.. she’s/he’s something.. but good on him/her.. awesome to see such power in a stage show. It doesn’t matter anyway, why do you keep asking?

By this stage I’m way double parked on the beers. And downing them quickly. Soon enough we catch up with Michael and Prue, and Sam and Maddy, their childhood friends are there too. I’m stoked, it’s a good, fun atmosphere, particularly when Sam I embrace intimately, writhing on the ground for a bit. It had been a while. I think maybe he had an erection.

More beer. Double parked. Getting buzzed. Michael gets a bark poo on his pants. And doesn’t realise for ages. 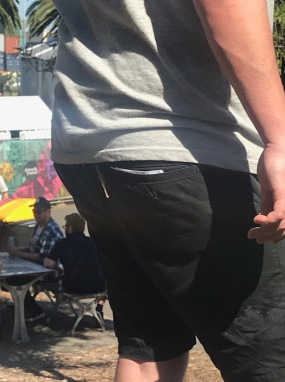 The settings great. The suns out.. the rivers right there.. the gardens are shaded and the grass is nice and dense and great to sit on. There’s a bunch of food trucks selling all the fancy shit that even you’re most accomplished hipster in his leather vest would dubiously accept.. if it could be deconstructed.. with a turmeric infusion ganash something something what.

So we do a few laps I think. More beer. And somewhere between all the bands I have like 6 people come up to me and say something along the lines of:

‘Oh hey.. bring it in..’ huuuggggggggg

I get a great pic of the Michael and Sam just chilling. And then see this awesome guy just staring back at me. Maybe thinking I was taking it of him. Either way, I love him. What a character. Like he’s just saying.. 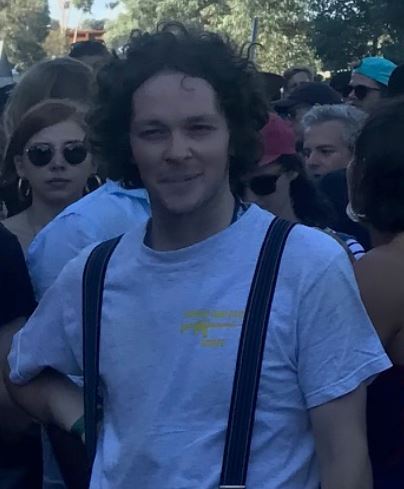 The crowd smashes together to see some act I can’t remember but we’re squeezed in massive. I could have licked the neck of the guy in front of me.. if he wasn’t wearing a bandana. So I twiddled on the bandana for a bit with my finger while we waited for whoever it was so show up. 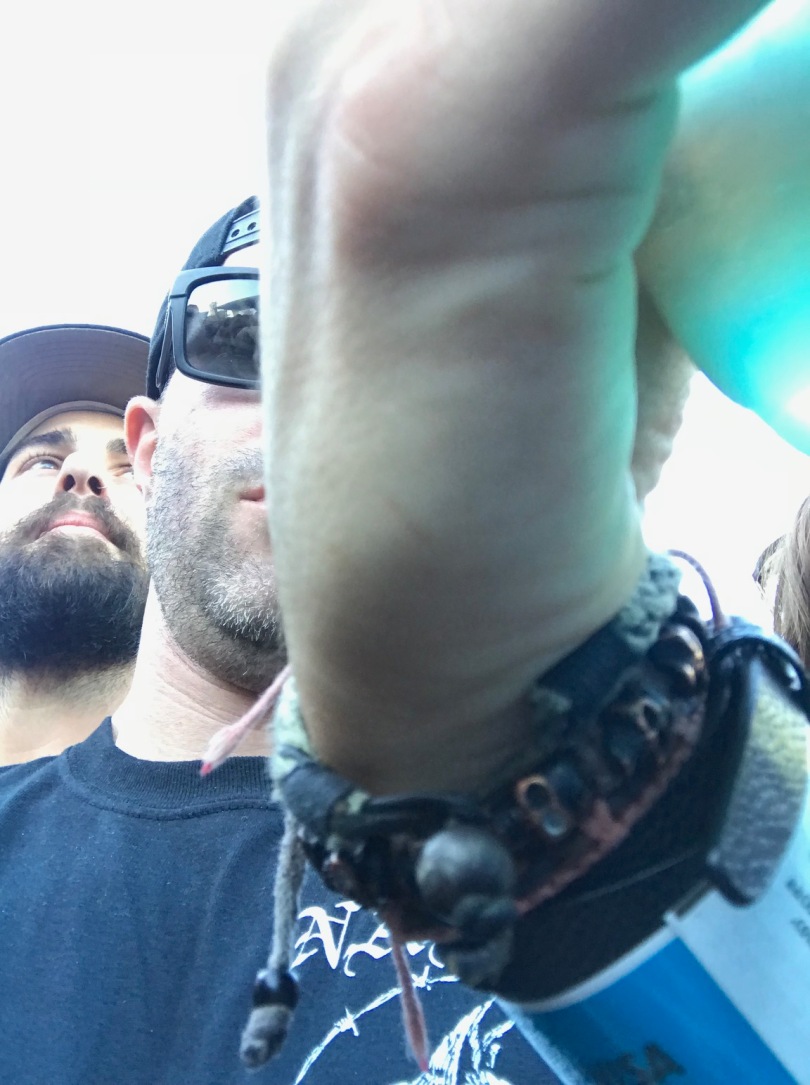 See.. breather behind me. Soz for the chin.

So anyway that became I bit boring and it turned out Bonobo was playing so we dropped mic on that crowd thing and whatever band was playing, and did that annoying thing where you back out from a massive crowd (I’m not gonna call it a moshpit).. but everyone was really cool, smiley and moving apart for us. Such good people.

And Bonobo was good too. Great sound, great atmosphere and people just letting loose. Though the music’s chill, there was a great sense of peace and fun amongst the crowd and it felt good to be there.

When Bonobo was done, we fanged it to TOKiMONSTA. Who ruled. Love her music. More beer. Now we just sat on the grass here. Under the trees, sun had gone down, night coolness rolling in. And when she was done, and there was nothing left to do, without stretching it more than it needed to go.. without protracting for the sake of getting value from what we’d paid. We up and left. It was the perfect time to go.

I vaguely remember eating some chips at Footscray station and taking a picture of PSO’s, that I can’t find now. But it was ringing as probably a good time to get home and get to bed.

So how did this happen? How did I get here. I didn’t want to go. I got assaulted, I got pissed on. I witnessed drug abuse. I was probably stoned and drunk. Not sure that’s normally my idea of a good time.. shit maybe it is.

But I think actually it came down to people. It came down to those to challenge my mindset a bit, prepare my thinking; not to take it so seriously perhaps. I was happy to put up my flag and even happier to feel the comradery despite feeling a bit out of my comfort zone. But then feeling the sense of fun at the show, meeting some great people, being a bit of a rascal and knowing none of it really meant anything. It’s all just designed for people to gather, share in some food, music and drinks, and have some fun. Shit will happen but’s part of the story, and the story read better when the pretensions left out.